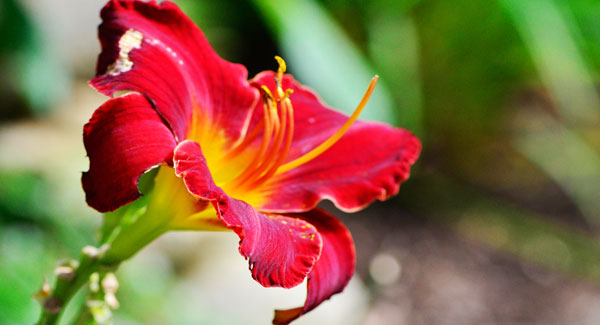 The temperatures are growing slowly cooler as Connecticut begins to prepare for autumn. This year, we’ve had alternate wild rainfall interspersed with hot/humid days. The garden has welcomed the rain but because of the heat, the soil dries out dramatically quick, requiring more watering then usual.

Earthworms are on the rise, I’m told that’s because of the additional moisture. I have so many earthworms that the soil is eroding in many places to the point where groundcover on a hill just slides down. At first in disbelief about the veracity of my tale, the local nursery finally suggested trying buckwheat mulch that might desiccate the worms. Calling all fishermen and women! Free earthworms. The buckwheat is similar in look to cocoa mulch. However. It’s expensive stuff and doesn’t smell as divine as cocoa…..we’ll see.

I just posted a few versions of my new poppy scarf on Facebook for review. I spend a lot of time working on details of color and shape, always with an eye to what people have liked in the past and what might appeal this fall. My purple gladiola design is almost on the runway but I’ve gotten a little sidetracked considering a new idea. An infinity scarf in lightweight organic cotton knit. Stay tuned. A muslin layout is partly done. Last year a few people asked about a “winter” version.

Around this time of summer,I begin making the rounds to tidy down various plants. Pruning yellows leaves or stalks and deadheading- you know the drill.

Bearded Irises flower sequentially on buds spaced along the stems (much like gladiolas). Do NOT trim iris leaves after they’ve finished blooming as the leaves carry on photosynthesis for next year’s growth. By early fall you can cut them back to about 6”. After the first hard frost you can cut them to ground.

Astilbe– Deadheading astilbe won’t encourage new flowers, so you might as well leave them in place through the fall. Eventually, the flowers will dry on the stalks in place. When winterizing the astilbe plant, you can trim away all the foliage, leaving about 3-inches of stem above ground. More about this.

Daylilies– for aesthetic purposes only. A “daylily” as its name implies, opens in the morning and dies at day’s end. Pinching off the spent flower is mainly for “looks.” However, the plant spends a lot of energy creating large seedpods that might otherwise go to strengthening the roots. So, feel free (as I do) to pinch off the spent flowers.

Summer time is time for the blues. A classic Sam Cooke song “A Change is Gonna Come” performed by Missouran father and son Brian and Thomas Owens. Love the backstory.