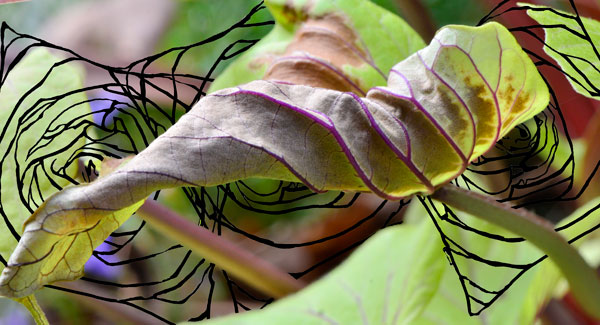 We visited the Bridgeport Technology Center in Bridgeport on Friday to preview the Black Rock Gallery (BRG) Mid-Century Art Auction – currently online. This was our first visit  and it was an experience. Took a while to find in a town that time seems to have passed by. Downtown Bridgeport- been there? It’s best to know exactly where you’re going. The show was held in a large collection of  industrial buildings. The viewing was on the 2nd floor of a very large building. 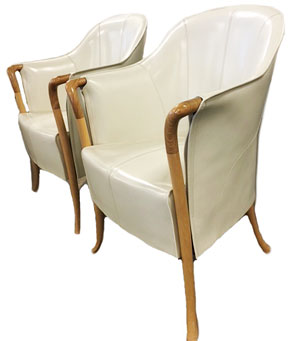 A pair of Giorgetti Progetti Italian Leather Armchairs. Completely removable leather covers. The wood armrests are finely finished -the whole package is beautiful to look at.

I have a close association with mid-century artists as my father was one. But what does that mean? Darn if I know- really. In the US, Mid- Century art style was considered to be more organic and less formal than International Mid -Century. It was all strongly influenced by the Bauhaus – a German art school active between 1919 and 1933. The function of the artwork was as important as its style. The expression “form follows function” was a driving principle in industrial design and architecture of the period. The phrase was coined by American Architect Louis Sullivan.  There was a  large number of pieces of Italian origin in Bridgeport. Most chairs we sat in were tremendously comfortable-both in materials and design. Leather and wool were often incorporated into the furniture covering. 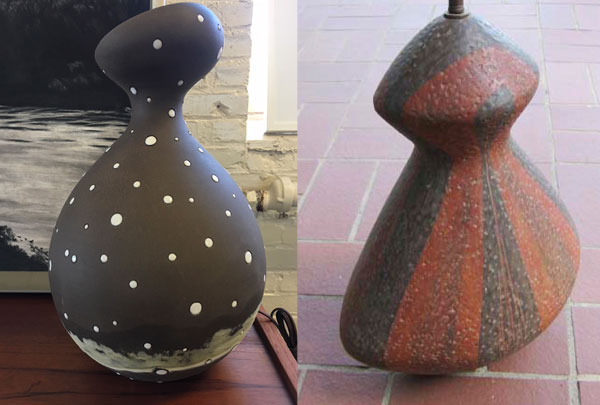 The “pot-as-lamp” to the left is Italian. It’s inscribed on the bottom: “Raymor and Italy.” It’s not clear who the artist was. The lamp base on the right is my dear dad’s- Alexander Giampietro.

The word ”playful” comes to mind when I look at these two lamp bases side by side. A mid-century feature? Sometimes. It’s also  accessible. From a reasonable size in a living space to ease of access and bringing the outdoors in, mid- century is sometimes best experienced in video..

Raymor was the brand name of an import company, a distributor based in America and active from 1941 until 1980. Raymor was founded by Manahattan entrepreneur Irving Richards. Most Raymor goods were imported but  some were also manufactured in the US. Raymor worked with many leading American, Italian, and Scandinavian designers and the companies they worked for. More here.

If you Google “Raymor” you’ll find many different art styles. From varied cultures and styles. It’s helpful to find the name of the craftsperson because you quickly see both style variants and their “family” relationship.

Check out the Bridgeport show! 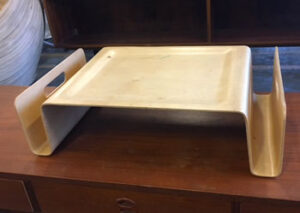 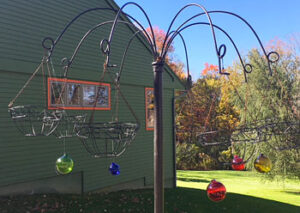 Autumn has come to the flower tower outside the house. I left the black metal baskets up for now. Part of Halloween décor- flower basket skeletons.

Alecia Beth Moore aka PINK, is an American singer, songwriter and all around artist. I’ve always been a fan. Her new album “Beautiful Trauma” is her first since 2008.

The backstory on the album- interesting interview. Always respectful of others, Pinks tries not to tell people what her songs are about but rather give them time to understand it on their own terms. 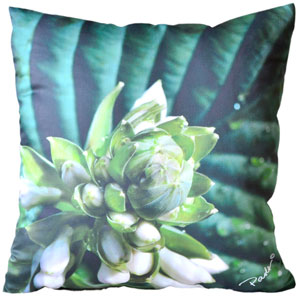