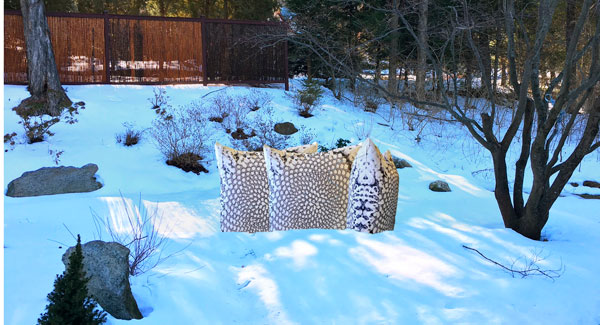 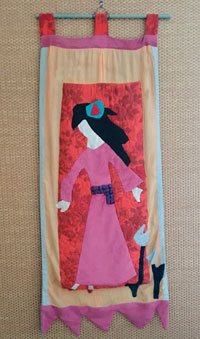 The woven blue sash-left over piece from a wool skirt I’d made, the orange background from the lining of a corduroy dress I’d sewn in high school.

Having sewn since childhood, I still remember walking to the store to buy lace and fabric at fractions of a yard to make doll clothes. I am passionate about textiles of all kinds and at a certain point I was making banners with recycled materials from dresses we wore. This is the first banner I made- many years ago- the pink was velour from the bridesmaids’ dresses at my brother’s wedding.  The banner reminds me very much of the Japanese “Boro” tradition. Very cool. I still remember where each piece came from.

Textile literally means “that which has been woven”. From the Latin “texere”, which means “to weave”. Textile consists of filaments (endless threads, like yarn) or fibers (short pieces of thread). Spinning and weaving which use fibers, originated in ancient Egypt around 3400 B.C. Historically, textile fabrication met family and societal needs for clothing and home decor first. As production capacity exceeded local needs, the textiles were traded for other goods. You can see why speed in production was so important.

The shuttle carries the thread.

The loom was the original weaving tool. It was used to weave cloth and tapestry. The basic purpose of a loom is to hold the warp threads under tension to facilitate the interweaving of the weft threads. Warp threads run lengthwise or longitudinally; weft is the opposite or transverse thread. Knowing this, you can better understand the modern use of the word ”warped”. Someone or thing that is out of balance as lacks the inherent ability to be “straight.” ( Sound like anybody you know?)

Hand weavers could only weave a cloth as wide as their arm span. If cloth needed to be wider, two people would work together. In the 1700s, a man named John Kay patented the flying shuttle. A weaver held a picking stick attached by cords to a device at both ends of the loom. With a flick of the wrist, one cord was pulled and the shuttle was propelled through the threads to the other side with considerable force, speed and efficiency. A single weaver had control of this motion and the flying shuttle allowed a person to weave much wider fabric than arm’s length and at much greater speeds then achievable with a hand thrown shuttle. A basic look at a weaver and her flying shuttle. With a lovely Scottish accent

The flying shuttle was one of the key developments in weaving that helped fuel the Industrial Revolution. The picking motion no longer relied on manual skill; it became powered by machine. 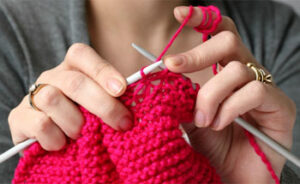 The Fukuhara Circular knitting machine from Japan is incredible. I saw one at Premiere Vision in NYC last year. It can create an entire garment on a machine- no hand assembly required. Not for me, but an awesome addition to the industry. The knitting machine in action

Unlike textiles made from threads of different colors, Sunbrella is an acrylic material whose color is achieved by mixing color into melted polymer. (plastic) Although I instinctively dislike the concept of printing natural images on plastic, the concept isn’t bad in itself in that there’s no dye or water waste. The bigger issue is one concerned with the acrylic fiber itself. Read more here.

People have infrequently asked if my pillows are weatherproof- would I make them in something like Sunbrella. The short answer is no.  I‘m concerned about the material and its impact on human health as well as environmental issues. You can decide if the convenience is worth it for you. I’ve decided not to go there. 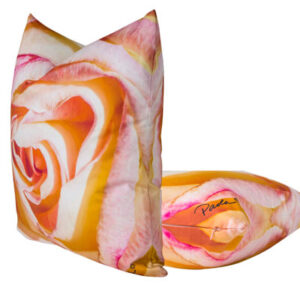 Paola Pillows are made from 100% cotton sateen. The photos are taken from flowers and plants I grow here in Litchfield. Our printer uses dyes and disposes of them and the necessary water as required by law. Nothing’s perfect but a person has to decide for herself what part of the process feels the safest overall for self, family and planet.

Great things are accomplished when talented people work together. Ever heard of PostModern Jukebox, aka PMJ?  PMJ is a rotating music collective founded in 2011 by arranger and pianist Scott Bradlee. This song features vocalists Haley Reinhart, Morgan James, and Ariana Savalas.  Good show!

Starting in 2012, PMJ put out a new video on YouTube each week, most were filmed casually in Bradlee’s living room. Many artists have cycled in and out of the ensemble performing a variety of pieces arranged by Scott. Very cool. Here’s another. Creep. You can see their tour schedule here. Oh no, North America was 2016. Oh darn,  you’ll have to go to Europe.