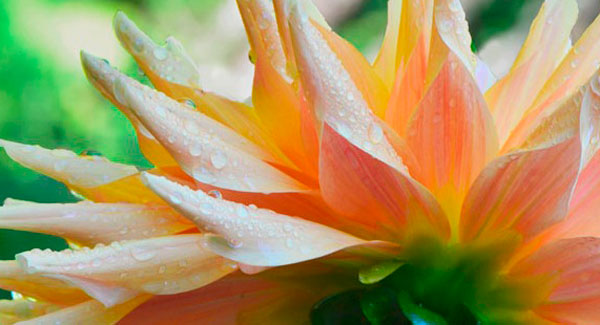 The locally grown dahlia tubers I planted this year have been thriving. I just don’t know how Amanda manages to deliver such huge flowers- they’re awesome. The sunflowers are on their way to flowering- just behind the dahlias and even taller than the five and a half foot dahlias.

Placement matters a lot. I credit the sunny spot they landed this year.

At long last after several years of angst, we’re ready to upgrade the land on the side of the house outside of the kitchen. It’s an area about twenty by twenty four feet, largely unable to grow either grass or plants because it has poor soil and lots of shade from the large ring of maples that surround it. Their roots stretch far inside the grassy area competing for the little nutrition they can find. 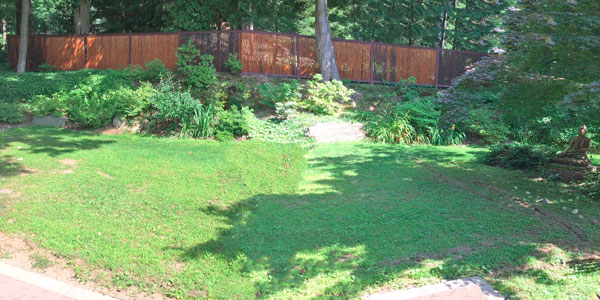 Looking from the house across the “garden area” to the offending hill with water and drainage problems.

When it rains, the area floods and puddles-poor drainage. The hill to its back has begun to slide because a lot of water collects in it from somewhere above and inside the hill. Get the picture…? The hill is full of azaleas but it’s a very early color blast and then nothing.

It’s been frustrating because you can’t jump into and plant away the problem. We just pruned the trees to  create a little more light. The next step is drainage and improvement to the hill, and grading the whole area in front of it so it drains better. With luck, that work will start in a couple weeks.

My master plan is to gradually turn the entire area into an enclosed shade and rock garden with different levels- a place to sit with shade-hardy plants, low light flowers and grasses. We’re going to lay down paper under most of the space and cover it with a combination of gravel, river stone, topsoil and mulch. No grass allowed. It’s a big area to plan out. I had to draft something to give to the guy who’s doing the drainage…well it’s a start. Still working it… 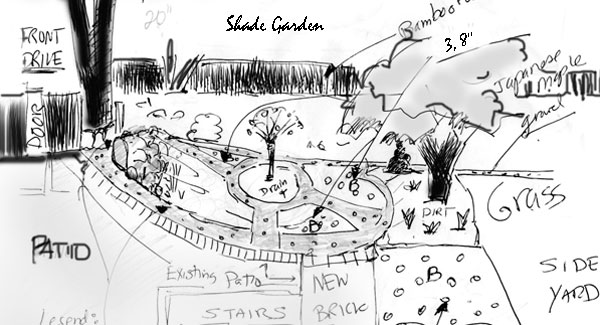 Same orientation as image above-looking toward the bamboo fence.

We have several bushes and small trees suffering in different places on the property that need a new home. We’re going to transplant those into the new garden later in summer when the heat has broken. I’ll scheme through the winter about what kinds of shade plants do the best with low maintenance. I’m thrilled that we have a small decorative lilac tree to re-locate. It will take center stage in the new garden with a seasonal flowerbed surrounding it.

Need some flowers for your home? I just completed pages on each of the first ten pillow designs we’ll be stocking in September. Don’t forget to check them out. You can scroll down and click on each image for more info.

Great song by Johnny Cash. Not sure why I picked it except I really like the song. Listen to it when you’re feeling down. Johnny knows. Personal Jesus- https://youtu.be/xyvFhrDzLfY