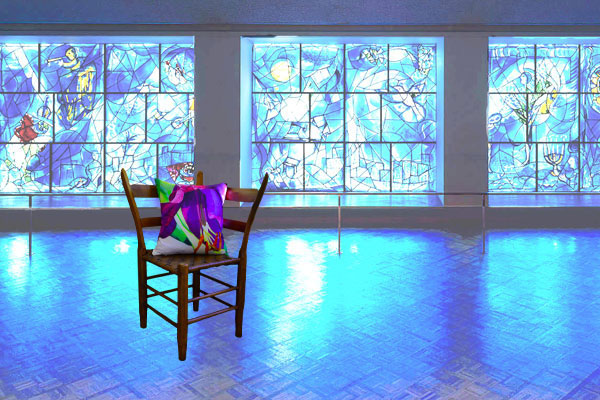 I’ve always enjoyed the work of Marc Chagall. Moishe Segalin (Marc Chagall) was born in Lithuania in the town of Vitebsk in 1887. Half of the town’s 60,000 inhabitants, including Chagall, were Jewish and considered outsiders in the larger, frequently hostile society. Jewish market-villages formed throughout today’s Eastern Europe had their own markets, schools, hospitals, and other community institutions. Limited movement and banned from public schools meant that Jewish people lived and worked sometimes their entire lives in one place.

Chagall was born into a family steeped in religious life of the Hasidic Jews that organized their day on every level, from food to work to prayer. Marc Chagall was one of eight children and his parents were very hard working people who operated a grocery business out of their house. 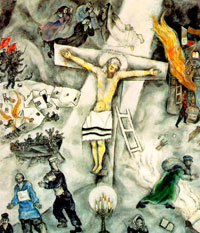 White Crucifixion, was said to be Pope Francis’s favorite Chagall painting- A pictoral representation of Jews persecuted in the name of Christ.

Fortunately, his mother sent Chagall to high school outside of their neighborhood which exposed him to a whole new life including the visual arts. In his lifetime, Chagall traveled and worked extensively overseas, living in Paris, Berlin, the US and home again to Russia.

According to Chagall there was no art of any kind in his family’s home and the concept was totally alien to him. Later, when he asked a schoolmate how to learn to draw, his friend replied, “Go and find a book in the library, idiot! Choose any picture you like, and just copy it.” Which he did. The rest as they say, is history.

I remember my parents encouraging us to copy other artists’ work when we were learning.  It was a way to learn composition, color, figure drawing from the inside. If you do it often enough, you begin to better understand how a painting’s elements fit together. You discover solutions others have found. My painting exercises included many different painting styles from impressionists to abstract artists. 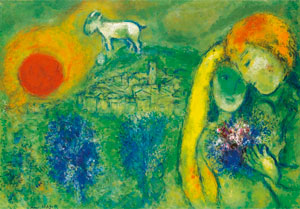 The Lovers of Vence

Chagall worked in lots of different media- Oils, pastels, watercolors, gouaches, lithographs, etchings, murals, glass, clay and stone. Chagall is known for his color, and a vast repertory of symbolism that draws from his Jewish culture.

Pablo Picasso himself said: ” When Matisse dies, Chagall will be the only painter left who understands what colour really is.”

Music is a another great love of mine and  an integral part of my life growing up. It’s one reason I always post music to share.

Fats Domino passed away this week at 89. Fats Domino was born Antoine Dominique Domino Jr., in 1928 in New Orleans, Louisiana. His first language was Creole French. He was the youngest of eight children of a very musical family. The Fat Man was called the first rock and roll song-and released in 1949. He was a charter member of the Rock and Roll Hall of Fame.

Paola Pillows join natural beauty with artisanal quality-its artwork wraps artfully around a feather down insert, creating a luxurious pillow, each design a work of art. 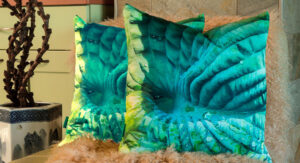