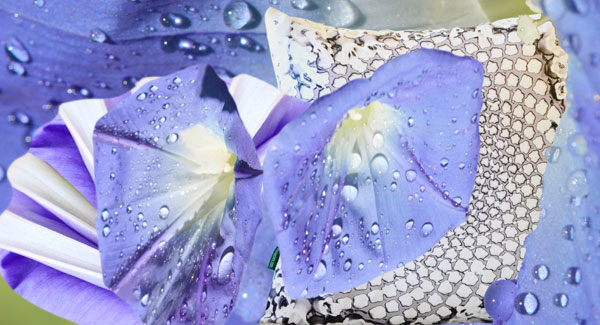 Indigo blue is the color of a magnificent aging morning glory. Morning glories open in the morning and die at night. The color indigo is described as between (primary) blue and the color violet on a color wheel. It’s sometimes called blue violet. Think blueberries or new blue jeans.

Indigo is thought to embody the concepts of stability and truthfulness. “True blue.” Its closeness to violet also calls to mind authority and royalty. 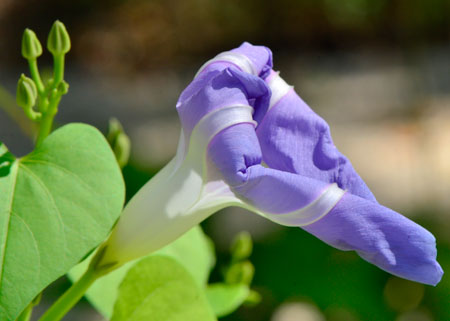 Morning glories soften with age, by the end of the day.

Indigo plants are native to tropical and subtropical regions worldwide. Indigo plant cultivation and the extraction of its dye was an important industry in India up to the beginning of the 20th century, when synthetic indigo was developed. Japan is home to ancient traditions using the indigo plant for fabric dying.

We blogged about current indigo in fabric use in Brooklyn last October for high end clothing. 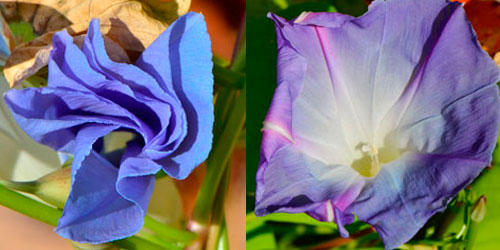 Morning glories look like fabric, opening in the morning and curling  into themselves by night.

Morning glory is the common name for over 1,000 species of flowering plants. I’ve only planted one color- Heavenly Blue. Its wonderfully variable color opens as heavenly blue and fades to violet by the end of day. When the October chill comes in, their colors grow a splash of scarlet.

Each Spring I used to dutifully sand and soak morning glory seeds to ready them for planting. I did this for three-four years running, and got plenty of photos. Unfortunately, they re-seed themselves and still come back unbidden annually, as unimpressive vines that insinuate themselves throughout the garden on every available stem. I’ve backed off from sowing them in the garden.

Here’s a helpful guide for starting them-only bear in mind the words, ”a lovely addition to the garden if kept in check.” Read more at Gardening Know How: How To Grow Morning Glory Flowers

I’m still crazy about their dewy blue faces early in the morning. Perhaps next year, I’ll bring them back segregated in a pot, on a second floor deck so they can’t escape to ground. 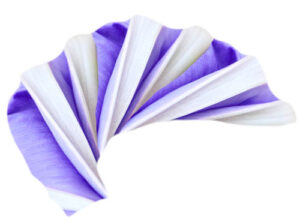 I’m working on some new artwork with morning glories. A fascinating shape! 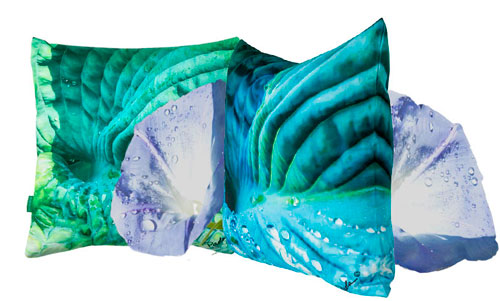 Paola Pillows- Ancienne and Aquilina  began as hostas in our Litchfield garden.

BTW.  Morning glory flowers are not poisonous to children- (birds, bees and butterflies love them) but their seeds are! They contain a chemical similar to LSD and symptoms range from diarrhea to hallucinations. Keep the seeds out of reach  of children. The flowers and seeds if ingested can be poisonous to cats and dogs.

All Paola Pillows begin in our gardens. Not only are they not toxic. They bring soft comfort to you indoors, all year long!