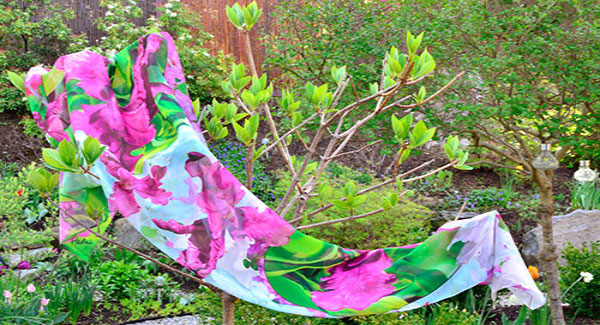 I’m not exactly sure why but in the midst of the Covid epidemic, I landed on the idea that this Spring I would finally get the grounds mulched for early flowering season in May, just AFTER fertilizing all of the beds. So, winter cleanup, cultivating, fertilizing and mulching all of the gardens BEFORE May 1. Out of my flipping mind. Nothing new here folks. Shown above is the first full Spring season for my new panicle hydrangea first pruned this February and just draped with a brand new scarf- not even named.. Azaleas and tulips incoming.

I’m pleased to say, the garden was mostly all ready for the azaleas- ahead of schedule. Unfortunately, I’m now a cripple and periodically writing at 2:00 am – my hyperactive mind unleashed by excessive physical activity. It’s not complicated. I had a deadline and once that happens, I bow to requirements. This was a pattern I cultivated when self -employed. At the time it was pretty much essential. Now? Old habits not yet dead. But not all bad! Consider the results!

I kicked off Spring on my hands and knees -exploring all the gardens to get a status report on relocated and new plants from late fall and some that had had damage from a late Spring insect infestation. Yuck. Sooty mold on the andromeda plants, caused by andromeda bark scale- back again.  I missed suffocating the bugs with an application of Neem oil in late winter so I’m now on my third Safer bug spray application. This pest can kill bushes and spread to azaleas too. I will follow up this winter with Neem, just to be sure. Learn more about treatments.

I generally learn about plants by growing and observing them and asking questions of other gardeners. Or, reading online. For certain jobs, like transplanting problem plants or pruning, I’ve resorted to YouTube with great success. Last year when my eleven ten -year- old boxwoods got sick – Leaves were curling and turning brown, with new growth dying, I became concerned. I tried spraying them weekly with various organic products to no avail.

Next, I took photos, shipped them to my old standby: The Connecticut Agricultural Experiment Station in New Haven, CT. You can also call, (203) 974-8565. It’s free! I also use them for soil testing. End of season this year I hope. The service called me back very quickly, finding we had boxwood leaf miner, and later I learned, a second insect called Psyllids. The bushes were sprayed late in season by a professional outfit licensed to handle pesticides and the bugs returned this spring. (not unusual) Apparently, the bugs have more than one life cycle- which can make for consecutive sprays. Luckily, they’re boxwood specific.

Today, the boxwoods were sprayed a second time and I have high hopes. I did find a company through a local nursery that has a very holistic approach but is also licensed to spray pesticides. They are simultaneously fertilizing the bushes. I like these people – Soden Tree Experts in Woodbury, CT. Fingers crossed.

Emma Swift – One of Us Must Know (Sooner or Later). Emma Swift is an Australian singer-songwriter, a nice voice, a folk style I’m a sucker for. She surfaced because she’ll be presenting virtually, on a Bob Dylan Symposium, the weekend of May 22nd, sponsored by the University of Tulsa. We’re not even sure if there will be any actual MUSIC playing but you can check it out here.