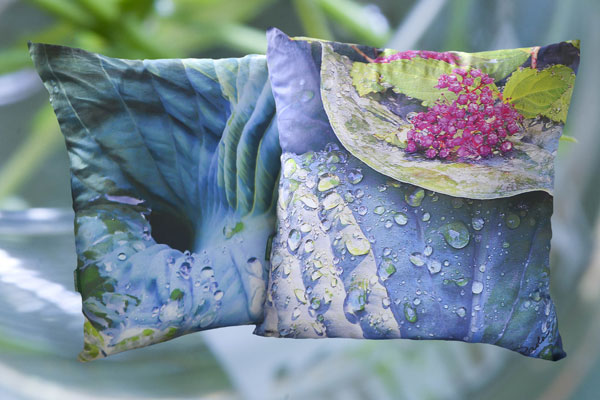 The pillow on the right with the pink flowers is an update to another pillow I made a few months ago. I like the way it picks up the blue color from the pillow to its left. The photos are both taken from the same plant. The flowers grow on a bush that actually lives behind that hosta in my garden. They hang out together.

Speaking for myself, Christmas has always seemed to present an opportunity for personal growth. I still remember the year I discovered Santa Claus in the closet- in the form of all the brown boxes that had been shipping in for weeks. I went to get them after we finished with Santa’s gifts under the tree and they were gone. Along with the mystery.

Today, I went to visit my older sister in the nursing home where she’s been for about five years. She was diagnosed with Alzheimer’s just under the age of fifty and was put on a feeding tube after emergency surgery a few years ago. She can’t move, talk, or take anything by mouth. I go less often than I used to because it’s hard to be there and harder to see her that way.

My sister cried most of the time I was there and it struck me more than usual that it wasn’t about me at all. She needed to cry and my job was to stay until she was done. I wiped her tears, rubbed her head, and finally played a song I had brought for her. I left when she was quiet again.

I hope to remember in the future that there is real value when you can deflect the need to always be at the center of your life-which is a never ending process anyway. I chose this song by Ray Charles (partly because I like his music) called “You Are My Sunshine ” but also because the next time you think about it, maybe you’ll make some time to be the sunshine for someone else. http://youtu.be/a8o4os6Um6g