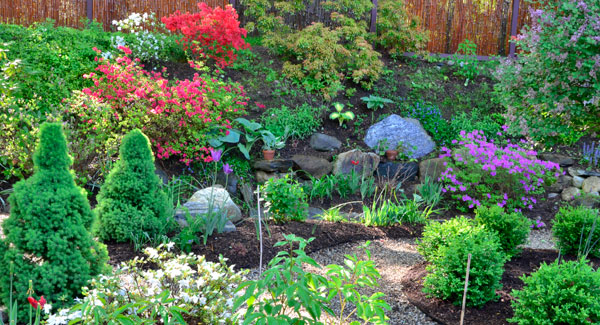 Obsession – The Inescapable Dimension of An Artist’s Life

Who isn’t obsessed with the promise of Spring/Summer right now? Can you just feel the sun and smell the garden in this scene from May 2018?

I signed up for a show the end of April and spent lots of time this week readying art files for an order. Followed by updating the website to match. Too much time spent doing things not very fun. (And no, I haven’t started my taxes)

The artist’s obsession drive for perfection overtook me as I finally made time to complete two designs, Caroline and I Feel Pretty. I’ve been selling both of them in different iterations. It was time to simplify. Previously called Caroline 1 and 2, there’s one Caroline now. I decided that I preferred a plain blue border to an overprinted one. At the same time I took aim at the white phlox.

Obsession as a character trait follows art collectors as well as the artist herself. This was a fascinating article about Jan Six XI, a Dutch Art Dealer based in Amsterdam. I wasn’t a huge fan of Rembrandt’s style but let’s face it, the man was a success on a grand scale, even though, as sadly is also the case with many artists, his family life was a shambles. The collector became driven to verify the right author of a painting he’d seen from a distance and systematically tracks it down. More about that story here.

Bessie Jones was born in 1902 to an impoverished but musical family in Dawson, Georgia and is credited with bringing black music out to a wider US audience. She performed with the Georgia Sea Island Singers, an American folk ensemble of African Americans formed in the early 1900s. They traveled, performing songs of the Gullah culture. Bessie felt empowered to perform to an ever-wider audience to preserve the stories and culture of her people. She and the Georgia Sea Island Singers, recorded and performed in Carnegie Hall, The Smithsonian, and Central Park. Folklorist Alan Lomax, named Bessie, “Mother Courage of American Black Traditions.” The Titanic sank April 15, 1912. I love Bessie’s voice and also the lyrics in the chorus that read,”  God moves on the waters.” I’m not sure as to the exact meaning but one can understand turning to God in terrible times, of which many of us understand intuitively.

Rhiannon Giddens is a younger and Oberlin Conservatory (opera) trained musician who’s made recording and sharing songs of black history an integral part of her music. Great lyrics, and an incredible backstory to this song, At the Purchaser’s Option.“You can take my body, you can take my bones but not my soul.”