Holiday magic is enhanced by stories we carry from childhood- memories shared through generations. As a child I was somewhat obsessed with fairy tales and as one of many children, I was probably part of creating many shared memories, for better and worse.

For those of us who take comfort in stories this time of year, I decided to do a little research on a Mexican tale called “Gypsy Queen” whose origin draws both from St. Nicholas (4th century Greek saint) and an earlier Italian story called The Three Citrons. The Three Citrons was a story from Il Pentamerone, a seventeenth-century collection written by italian poet Giambattista Basile. Il Pentamerone is considered the first full collection of European fairy tales.

Someone recently me asked where the custom of putting oranges in Christmas stockings came from. I cynically suggested it was to use space otherwise better allocated for more desirable things like chocolate or maybe earrings?

I re-discovered the story of St. Nicholas, who was said to have helped three impoverished sisters get married by throwing bags of gold down the chimney for their dowries, which landed in their stockings hung there to dry. Over time, oranges became symbolic for gold. We got oranges in our stockings… never gold.

Gypsy Queen is a great story that includes three very special oranges- share it with your friends and/or little people in need of a “feel-good” story this time of year.

Gypsy Queen was captured by Gabriel A. Cordova, Jr., of El Paso on the Texas Mexican border. He learned and recorded the stories from his accomplished grandfather, who spoke 12 languages, worked for NASA, the State Department, and could ”hook up any kind of stereo equipment” proof positive that a person is only helped along the road to success by his/her heritage.

Aquilina is my younger sister’s middle name. She has the beautiful green eyes and honey hair treasured around the world. I named this hosta design after her. It remains one of my favorite. You can see and buy Aquilina and other Paola Pillows here. 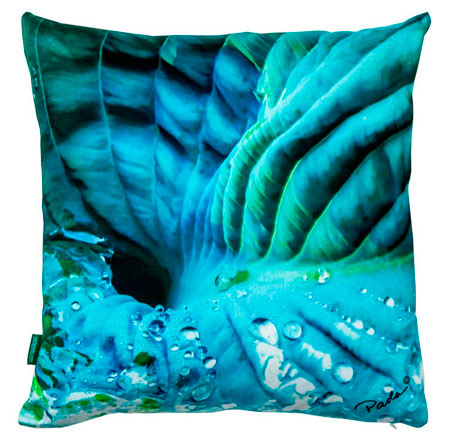